The Most Legendary Wedding Dresses of All Time

Most of the girls have been trying to picture their future wedding since the age of 5. Disney’s fairy tales ending with a royal wedding literally dictate how to behave when the princess becomes a bride, and girls gladly follow the example. They make an amazing dress out of a sheet and a wedding veil out of a curtain. After that they wear mom’s shoes that are 5 sizes larger and solemnly walk down the corridor, radiantly smiling to the seating along the aisle toy guests. It’s hilarious that the presence of the groom in this game generally wasn’t necessary. Certainly, the wedding dress was the main attraction.

Every bride has her own perfect dress. Someone is dreaming of becoming a real princess, someone – a graceful lady, someone – a sexy coquette or a super star. Wedding dress designers will confirm that after the celebrities’ weddings the number of requests for dresses “like Kate Middleton’s one” grows exponentially.

We’re going to tell you about 7 legendary and iconic wedding dresses that influenced the wedding fashion dramatically. 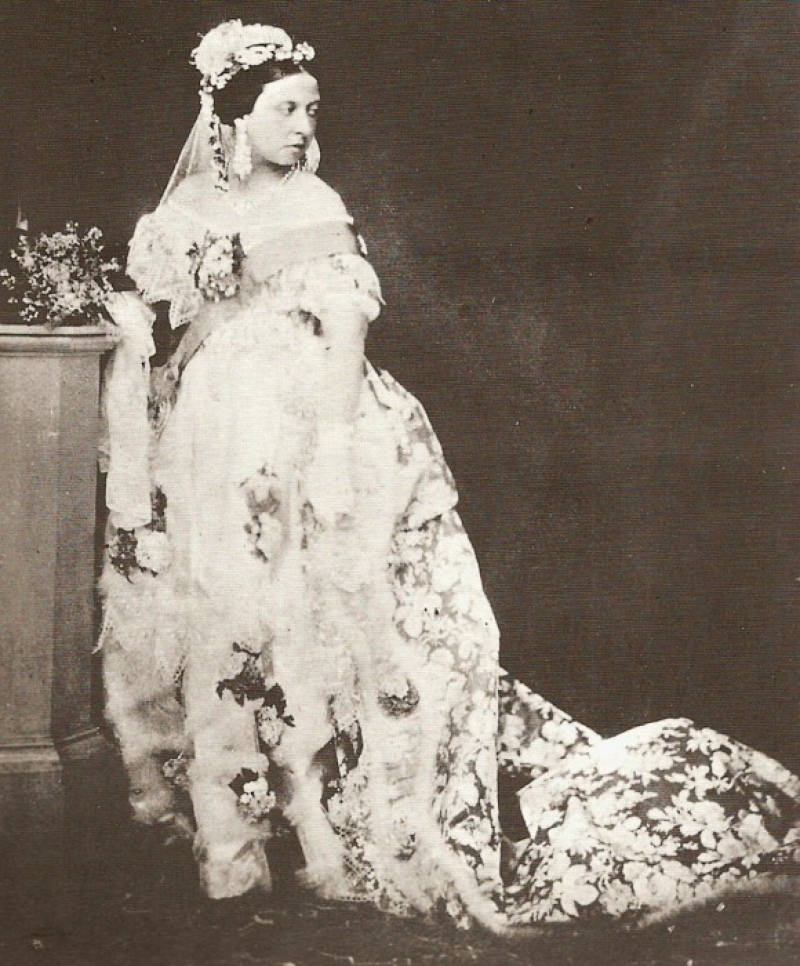 Let’s start with the basics. History consider Queen Victoria as a founder of the modern wedding fashion. The reason is that on 10th February, 1840 she got married, having chosen a white gown for the wedding. Until that time, women married in dresses of different colors and the white wasn’t popular among them at all. But success was overwhelming after the publication of wedding photos. Thousands of brides, wishing to emulate the queen, chose the white color for their wedding dresses. This act has become a sign of high fashion, style and chic. As a result, the tradition remains to this day. 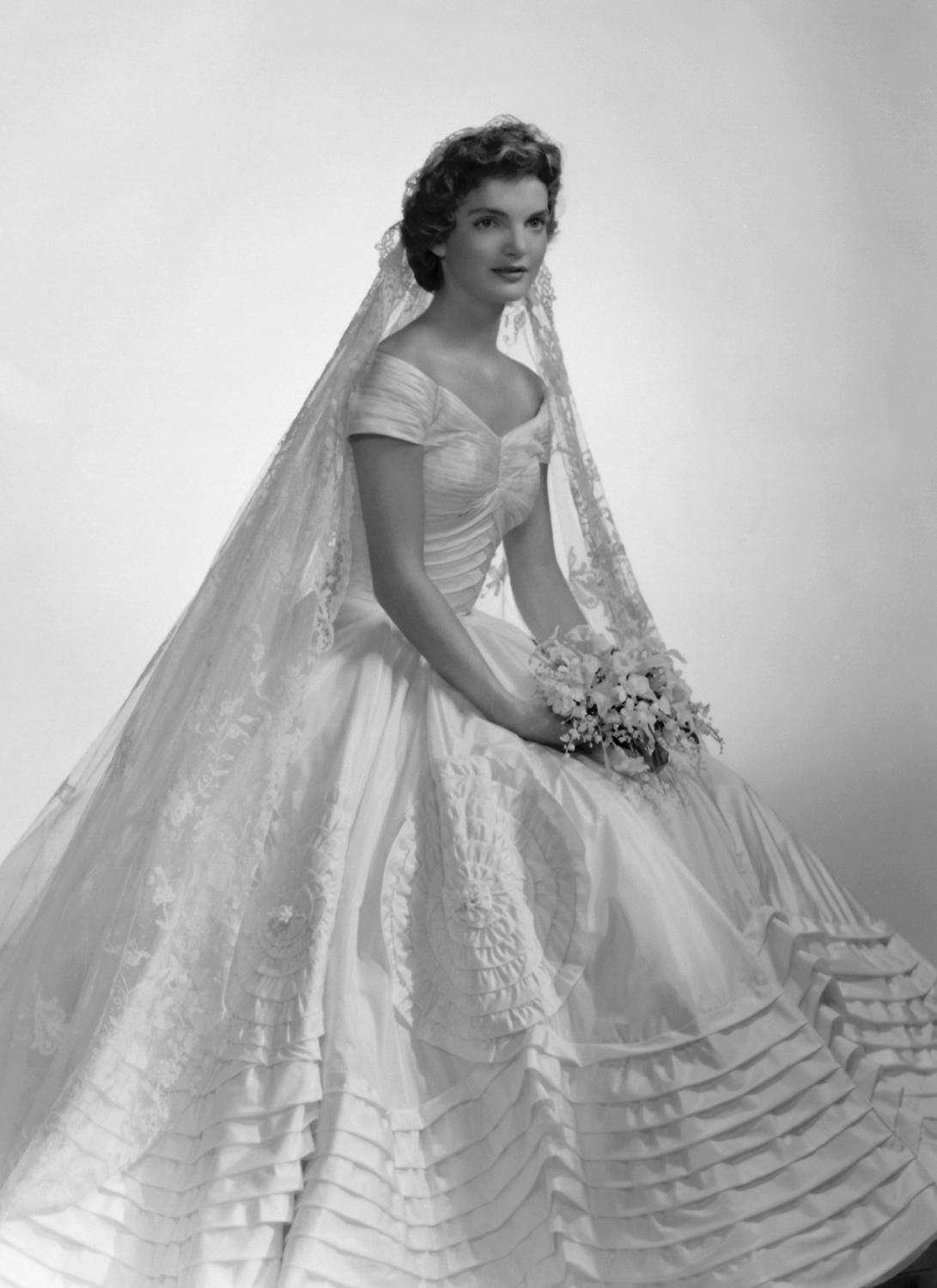 American style icon that only strengthened her title on her wedding day. The ivory-colored, off-the-shoulder, plunge gown with a huge round skirt and wasp waist in the style of 1950s fitted Jacqueline perfectly. She was like a goddess. Designer Ann Lowe made this gorgeous dress. It took about 50 meters of taffeta and several months of work to craft the dress. Grandmother’s lace veil perfectly completed the outfit. Notably, the dress didn’t delight Jacqueline. She thought that she looks like a lampshade in it. However, it didn’t prevent all the American brides from desiring to be like her. 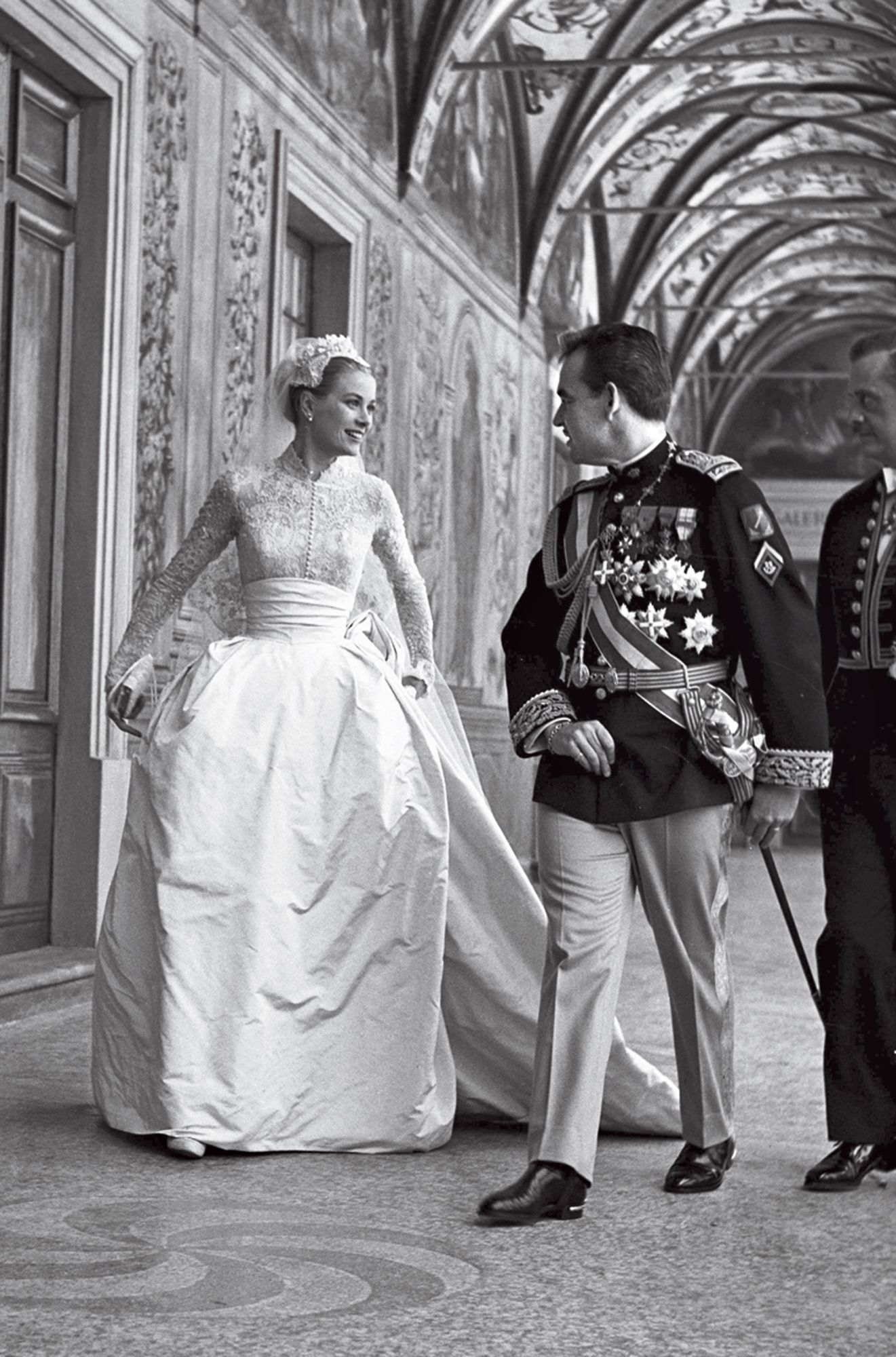 A legend of wedding fashion – the embodiment of American dream. Grace Kelly is a living fairy tale. Hollywood actress, marrying a real prince, becomes the princess of Monaco. Helen Rose, a clothing designer of Metro-Goldwyn-Mayer, designed Grace’s dress. It took 23 meters of silk taffeta, antique pink lace and hundreds of real pearls to make her wedding dress. The most skilled seamstresses have been working together for 6 weeks to create it. The dress has become so legendary that after 55 years another bride, marrying the prince, decided to repeat the motives of this gown. Of course, we’re talking about Kate Middleton. 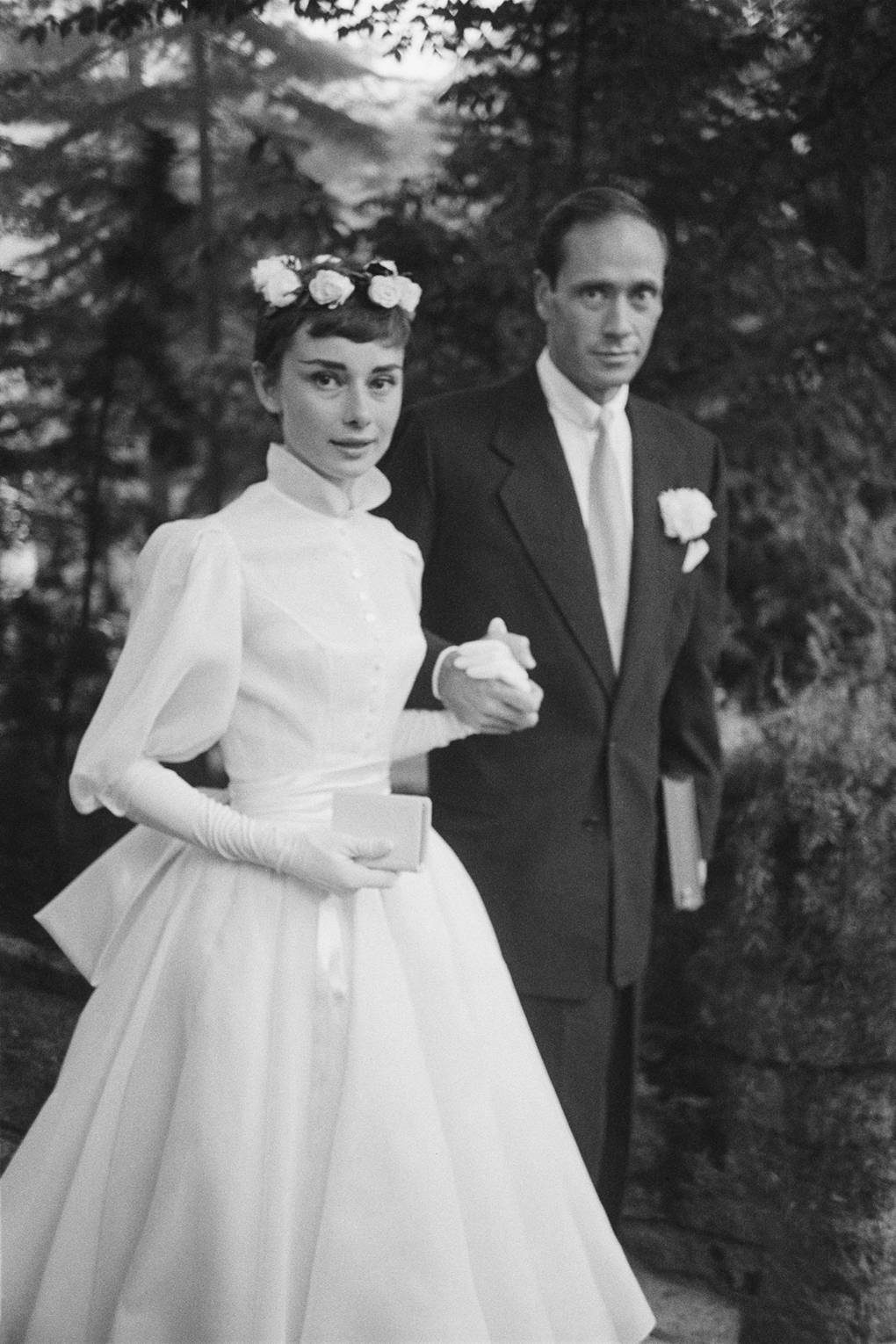 Audrey has been married several times but the most famous wedding gown is associated with her first wedding. Pierre Balmain designed this dress for her. The dress perfectly fitted the image of an icon of 1960s. It had a high collar, round skirt, puffed three-quarter length sleeves, followed by high gloves. Instead of veil, Audrey preferred to decorate her head with a halo of carnations and lilies. Her look has become so popular that it is still being repeated by designers in their wedding collections. 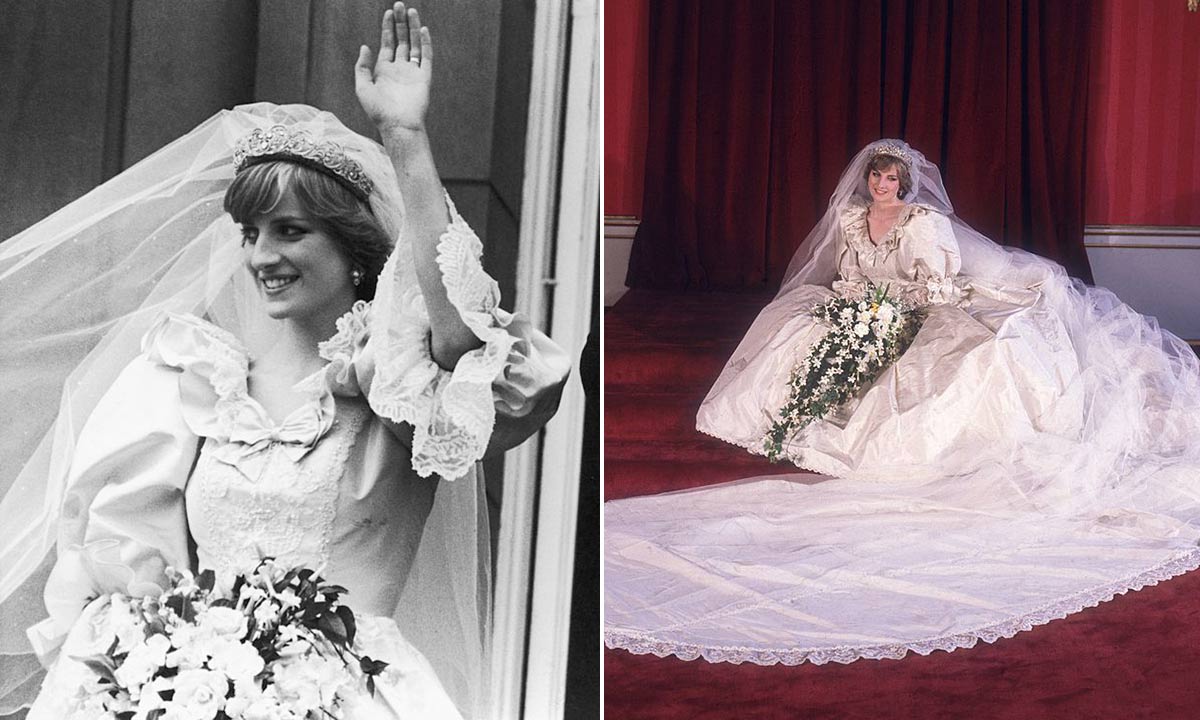 Probably, it is the most famous dress in our selection. Even those who have never been interested in fashion, will easily recall an abundance of frills, pleats, bows and sleeves. Later Diana will become an icon of style but on her wedding, she was, as fashion critics said, a stylish disaster. It seemed that the dress existed apart from its owner. It was “too much” of everything: huge sleeves, a giant skirt and enormous 8-meters train that nearly blocked the aisle in the church. The dress literally drowns the 19 years old princess. Besides, due to the peculiarities of the fabric, the dress got wrinkles when the ceremony began. You can see it on the old photos. Perhaps, this dress had only one advantage: the tall and broad-shouldered Diana looked like a tiny little Thumbelina in it. 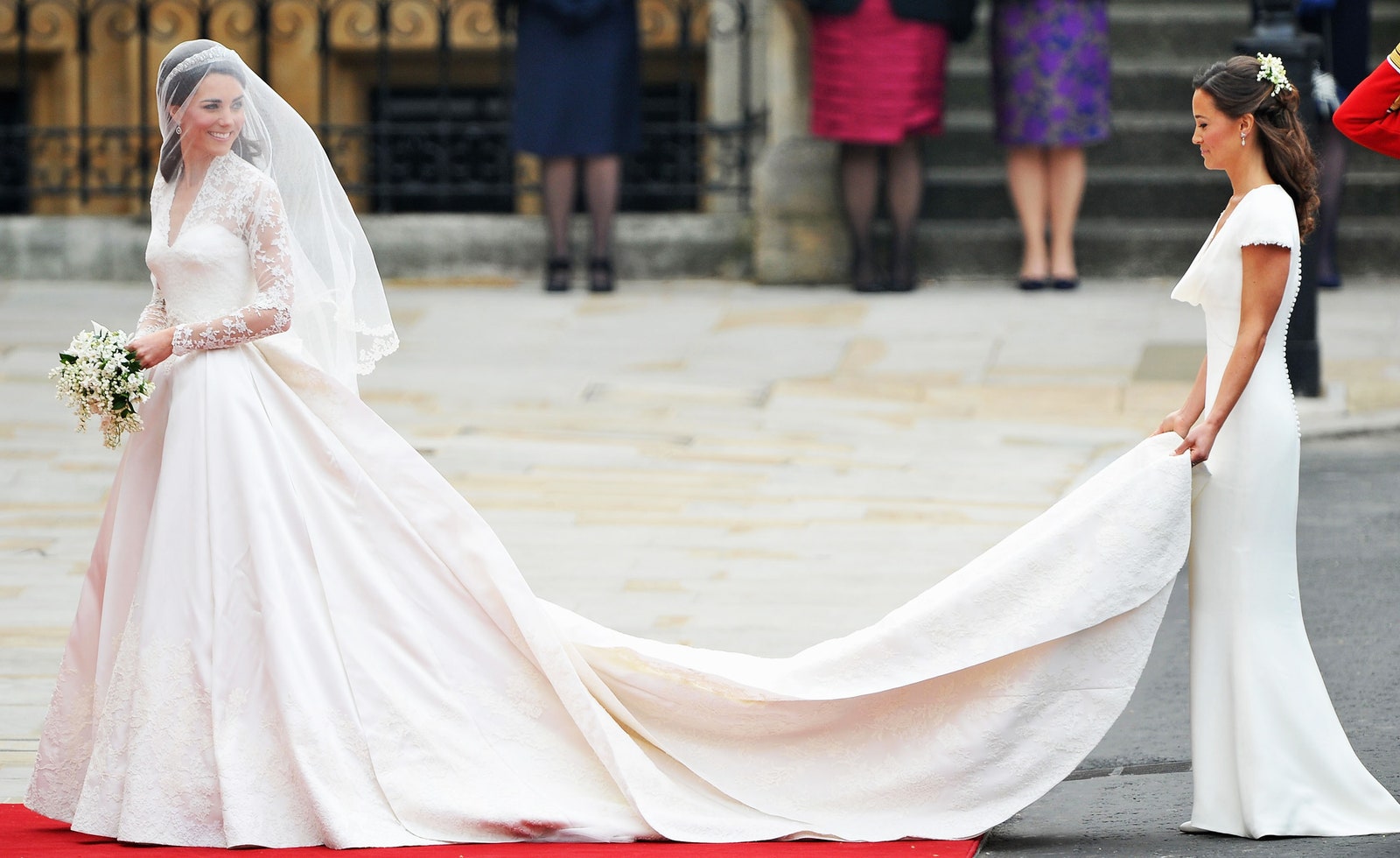 Here it is. Above-mentioned dress of the duchess of Cambridge. It’s almost become the most famous wedding dress in the new century. The author of her gown is a fashion house Alexander McQueen. 10 people, including director of the fashion house Sarah Burton, a woman who became a head of the company after the death of the founder, were working together to create this amazing dress. To make this snow-white gown made of silk and lace perfect, dressmakers washed their hands every half an hour and changed needles every three hours. The result was absolutely worth it! Kate was irresistible! The dress perfectly accentuated the beauty of happy bride. It didn’t steal the show but also didn’t simplify the look of royalty. 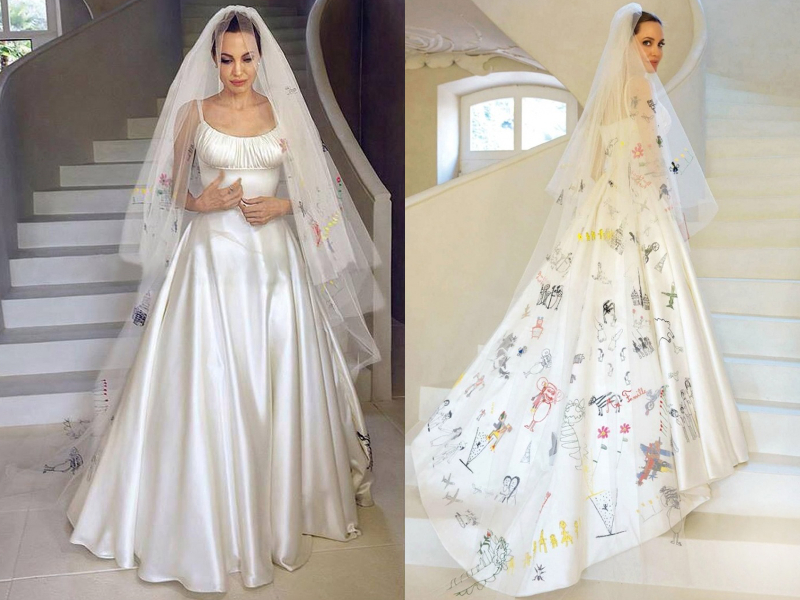 Despite the fact that the marriage of this celebrity couple has fallen apart and not in the best way, the dress of Angelina has also become an iconic one.

First, Brad and Angelina were postponing the wedding for many years, although they not only lived together but has also made babies together. Fans got tired of dreaming about “the wedding of the century” and even abandoned those dreams. But the children of future newlyweds were growing up and finally started inquiring about the reason why their mom and dad are not married. For their sake and for the closest relatives, Angelina and Brad got married at their estate. The bride also chose a special wedding dress. It looked like a classic white wedding dress with a round skirt in front. But drawings of their children that designers carefully transferred to fabric and stitched with silk thread, covered the train and veil of the dress.

That’s all. 7 iconic wedding dresses, in our point of view. Next time we’ll make a similar selection but with regard to movie wedding dresses. So, don’t miss out!

Sincerely Yours, Lev and Nina
CONTACT US TO GET STARTED