Surprise Proposal by the Ocean

Connor and Nicole’s surprise proposal session was truly unique in the way it was planned and organized. It could not have been more than perfect! Connor found us on Instagram through his sister’s account and quickly reached out to us before the proposal date he had planned. We were so excited to film this special moment as soon as Connor contacted us. 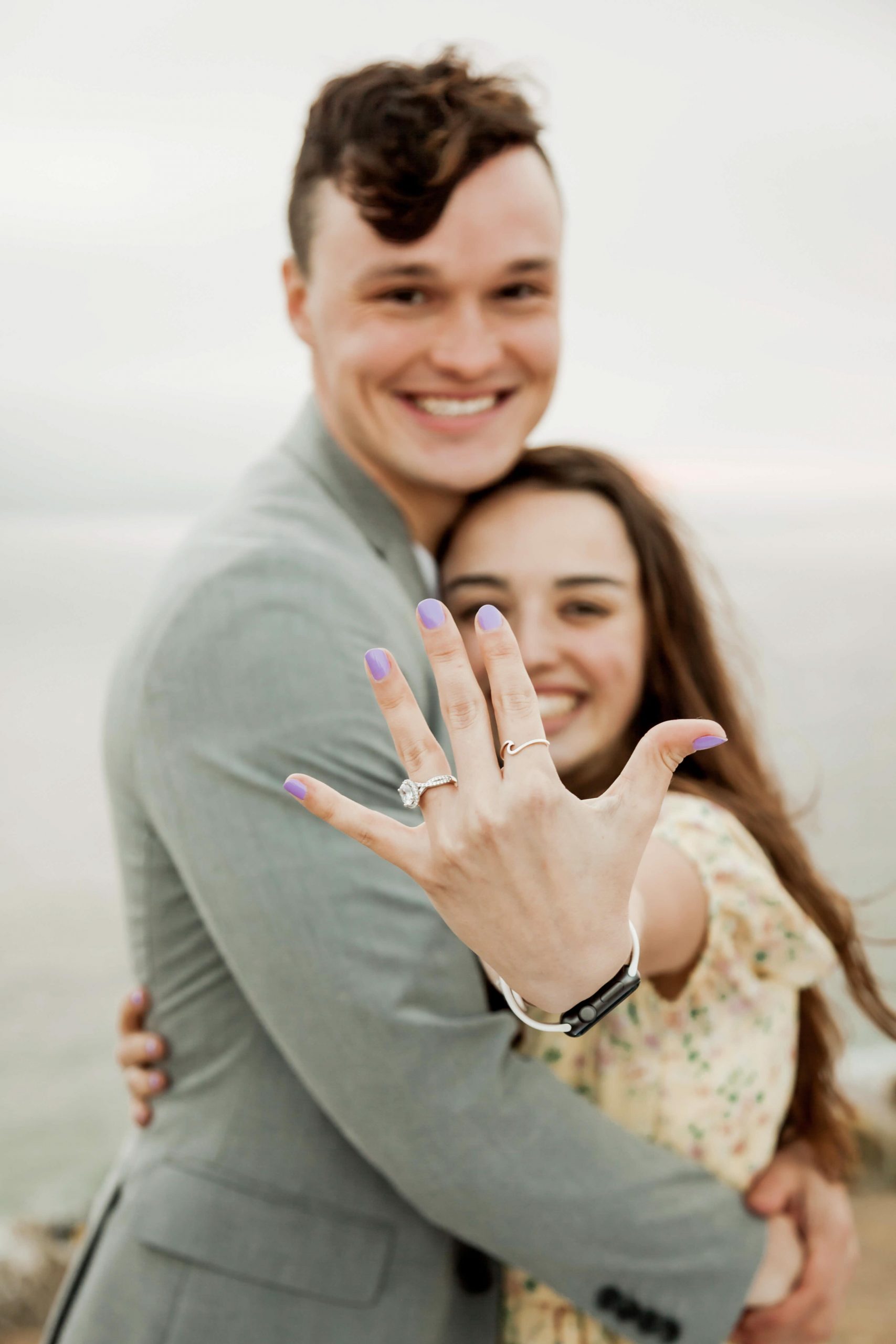 He wanted his surprise proposal to happen in an epic and beautiful spot. So he chose a hilltop at the Malibu beach – an excellent choice in our opinion. Malibu beaches are forever one of our favorite places to shoot with their idyllic scenes and comfortable weather. They provide us with far more picturesque backdrops along with diversity in landscapes. Connor’s top priority was to keep his proposal a secret from Nicole.

He picked her up after work and drove her out for dinner. Nicole initially thought it would be a fancy restaurant, so she got all dressed up beautifully, putting on her favorite dress and heels, but the destination turned out to be Malibu Beach with sand all around.

On top of that, all their family & friends had arranged a sweet table at the top of the hill where the couple was supposed to hike for the special moment. Only when Nicole got to the top did she realize that it wasn’t just a romantic walk, but something more special had been planned. 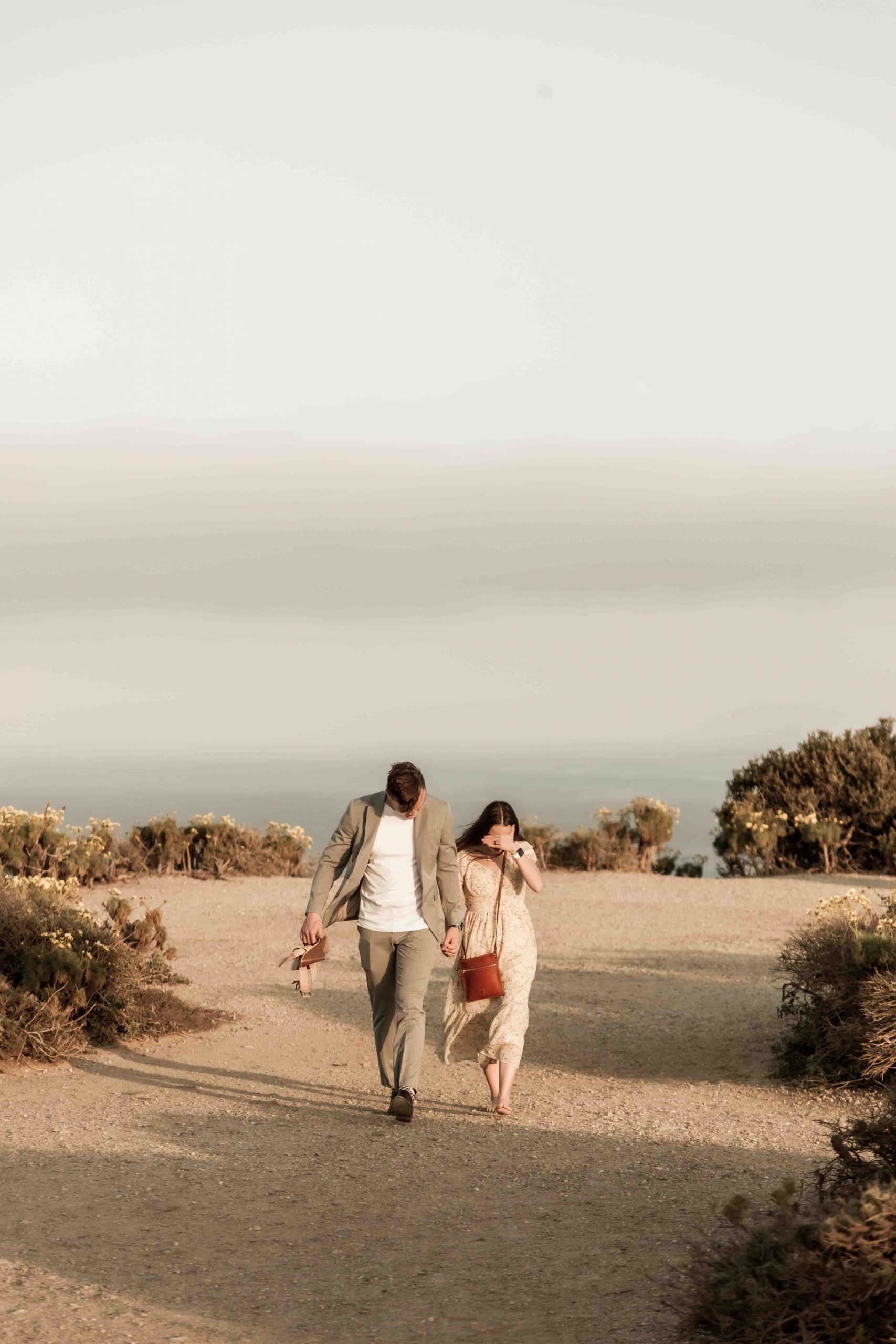 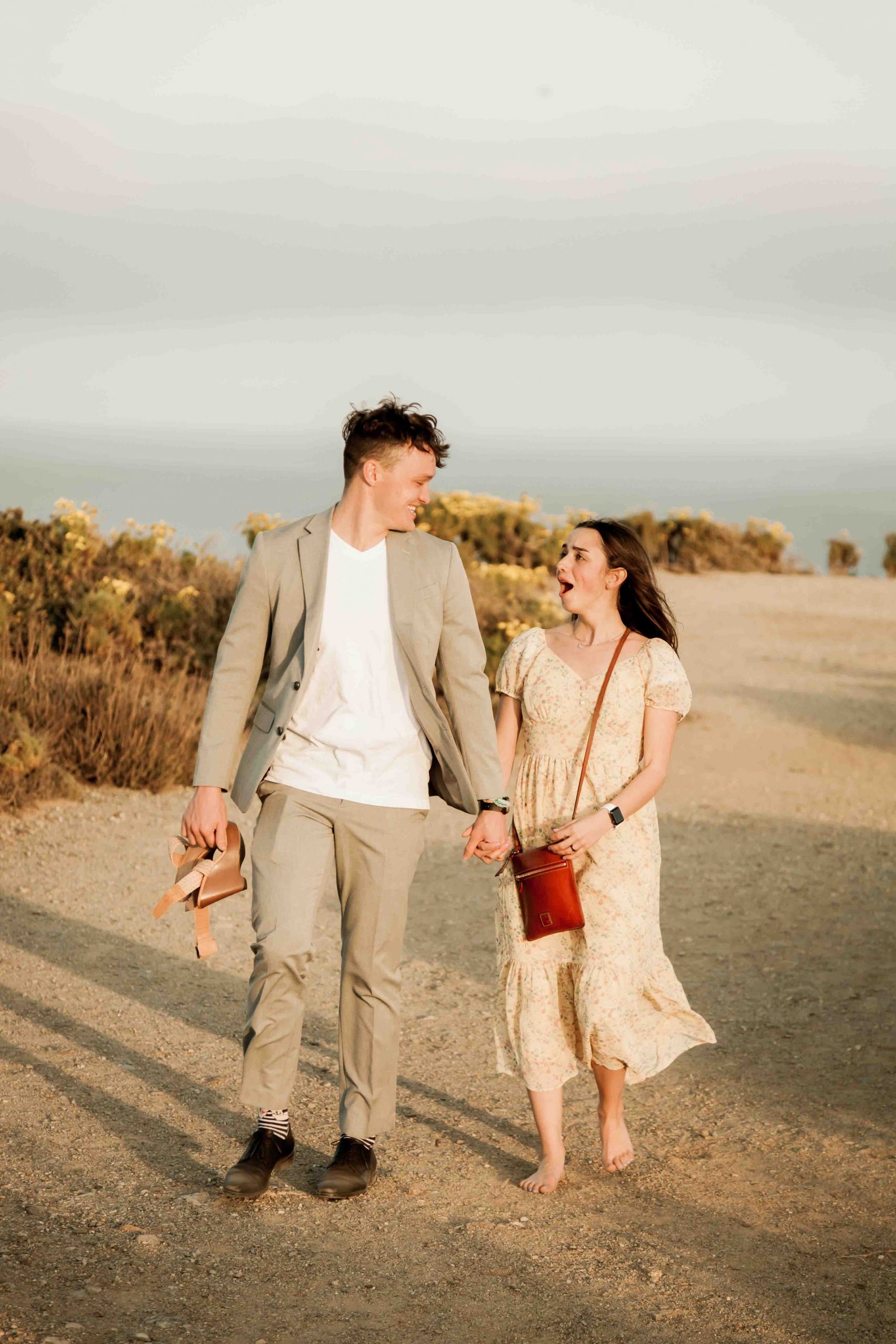 As they made their way up, Connor suddenly dropped to his knee and proposed to Nicole. She cou

ldn’t believe her eyes and was so surprised. She said “yes,” of course, and felt at the top of the world with this unique marriage proposal. 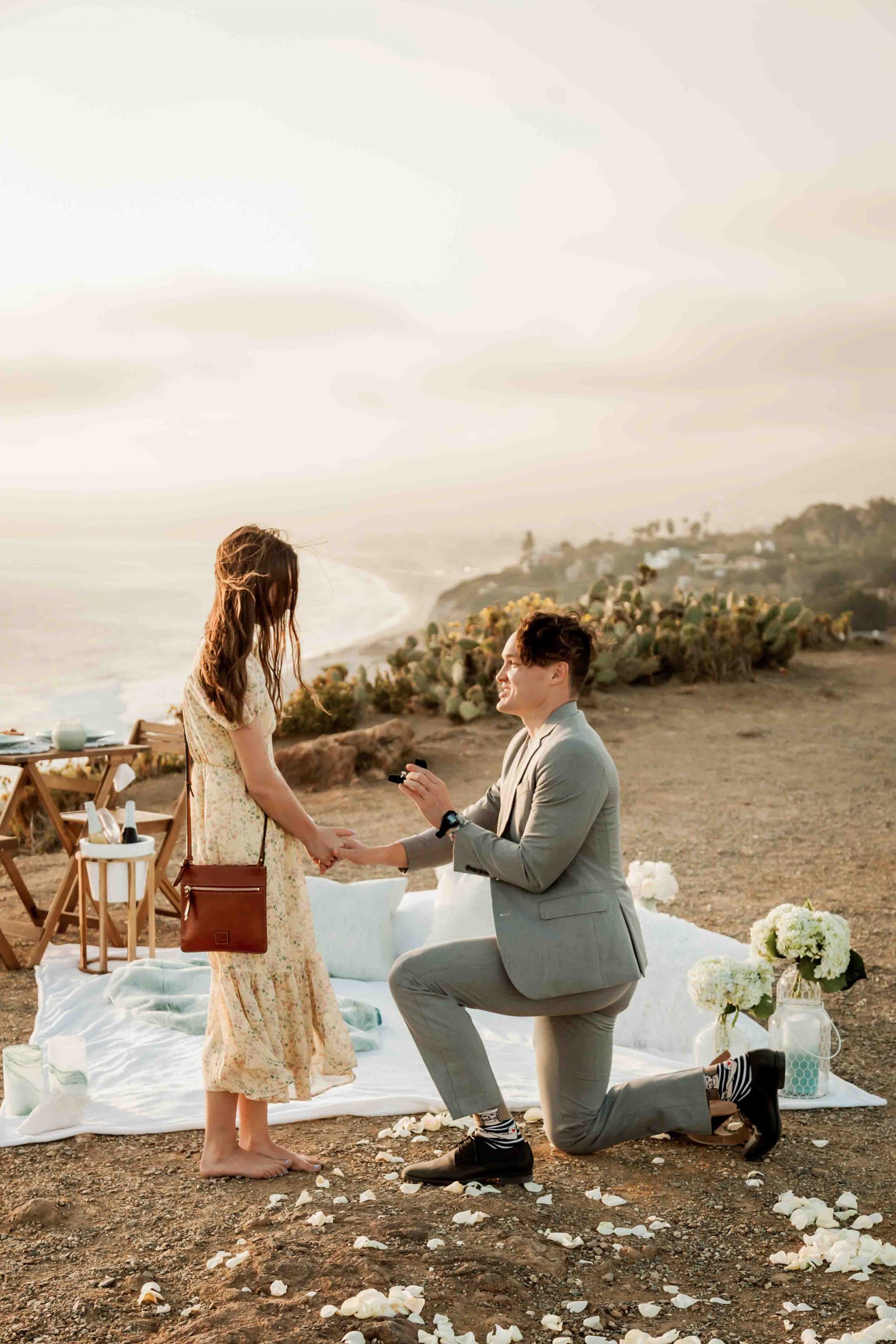 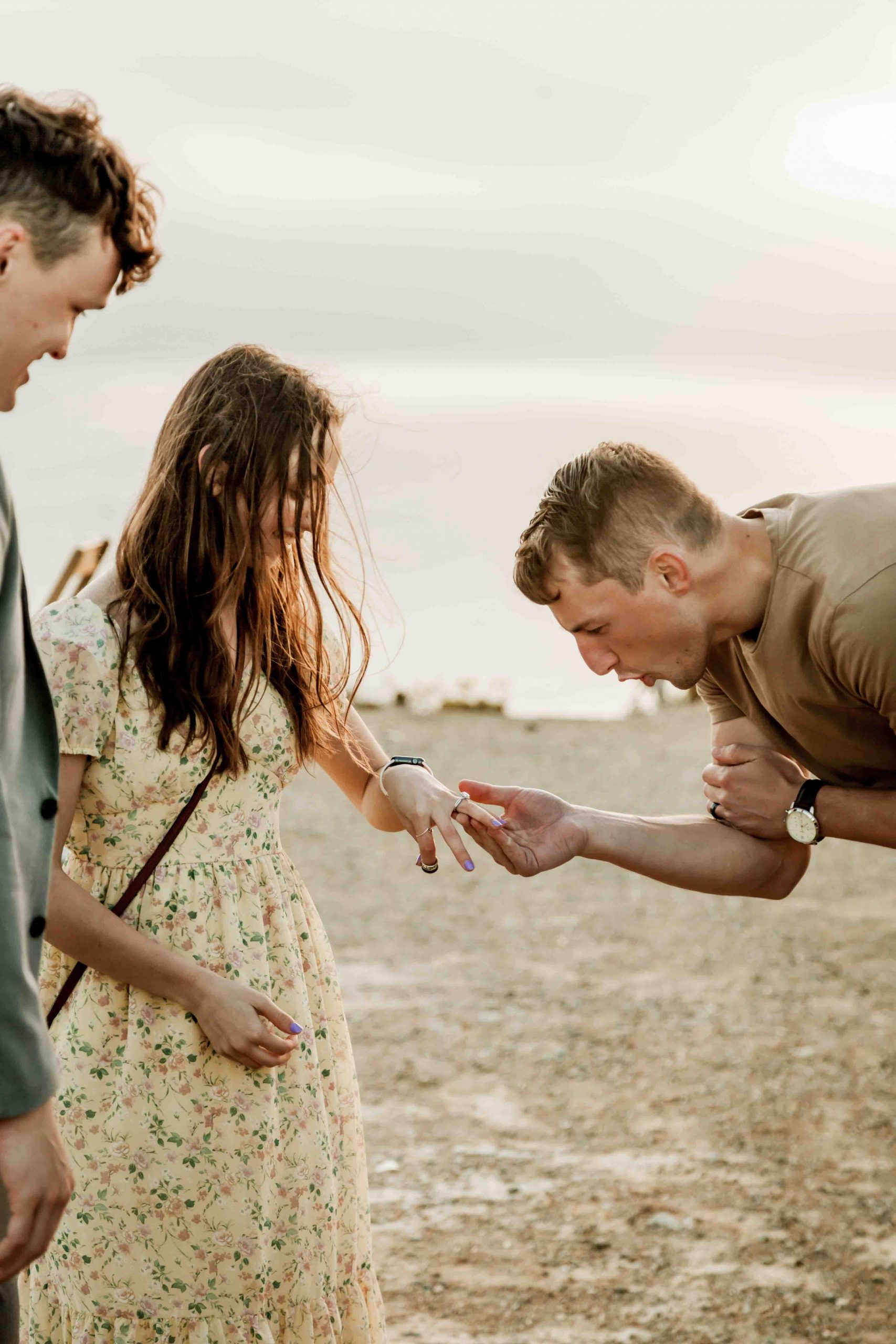 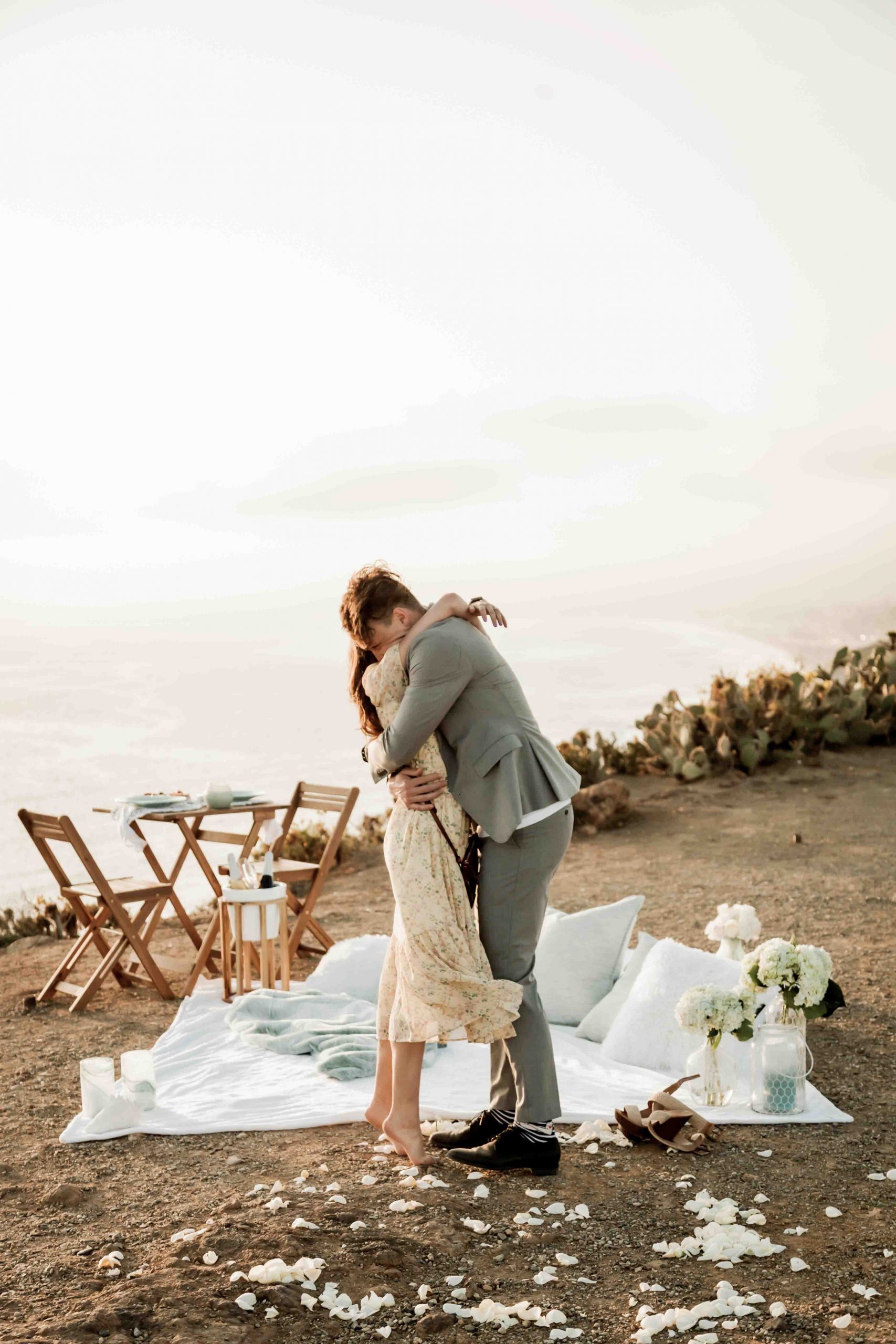 It was super sweet, and all the friends gathered around greeting and cheering the lovely couple soon-to-be husband and wife. When the sun went down, we took Connor and Nicole down to the beach for a video session to get some romantic scenes by the ocean. The beach surprise proposal was perfect with golden sunset, cool breeze, smiles, and love all around.

We love it when a surprise proposal goes exactly as planned and turns out to be the biggest and the best moment of your life. We are so thankful to the beautiful couple for having us on their special day. Also they invited us to film their wedding which happened in August 2021. It was such a joy to be with them and see how a new family unfolds towards a new journey.

Feel free to reach out to us if you would like to discover many wedding proposal ideas or set up an open, playful beach proposal session of your own. Surprise your loved ones and make it the best moment for your lives!

Warmly, Lev and Nina
CONTACT US TO GET STARTED