Small wedding in a park.
The story of Evan & Andreana

As we’ve said before, we’re lucky to meet the best people. All our couples are awesome, fascinating and imaginative people that have their own special love story. Today we’re going to tell you about a newlywed couple. Their wedding has probably been not only the craziest and bustling but also very exciting and memorable for us. So, meet Andreana and Evan. 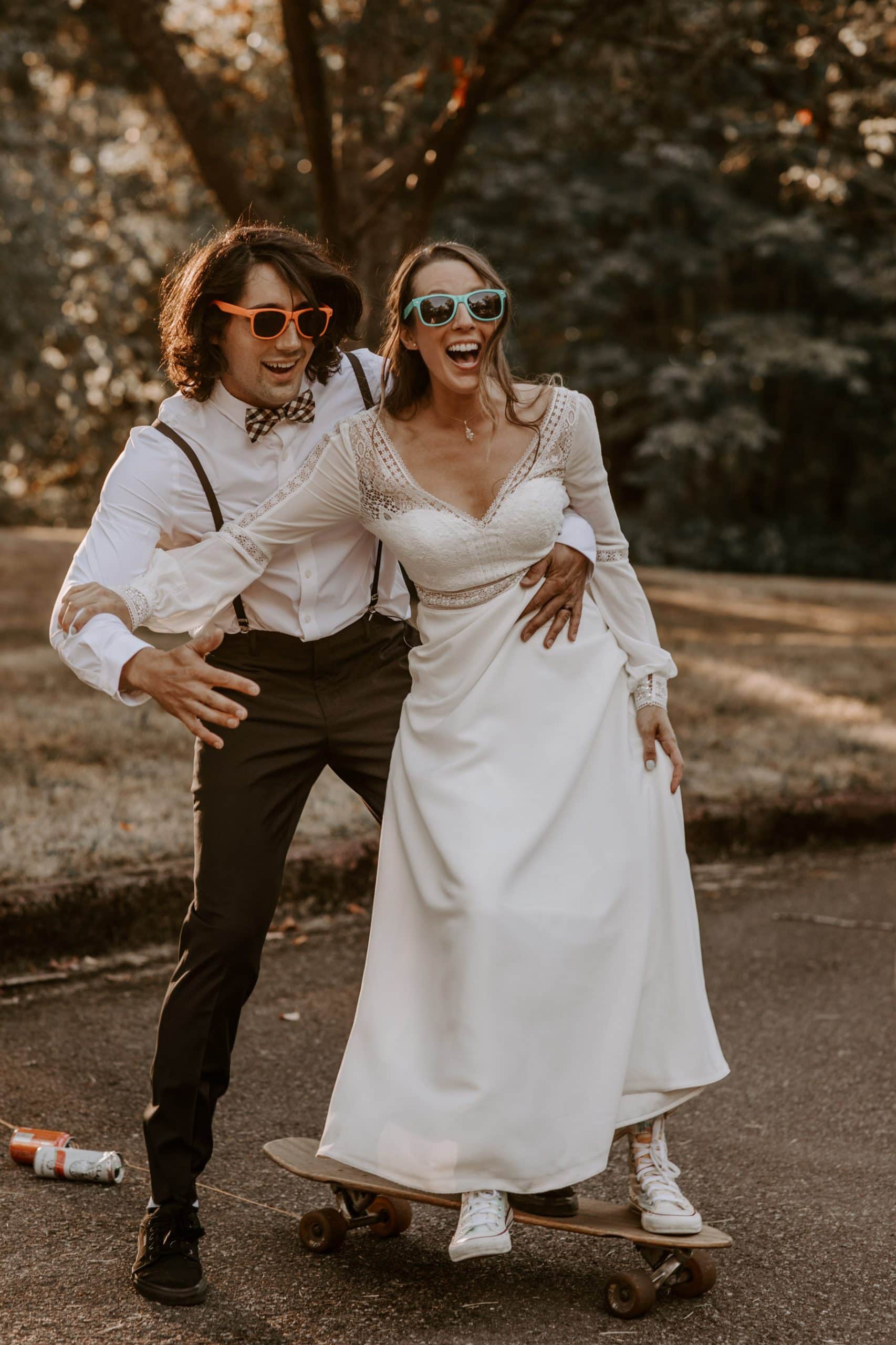 These guys, as well as many newlyweds of the year 2020, fell under the spell of COVID-19. However, they were committed to be the masters of their own destiny and get married in August of this particular year whatever happens. Their own song that has become a soundtrack for the wedding film, contains lyrics about August. It is these lyrics that Andreana was singing in the video by herself to highlight their importance. 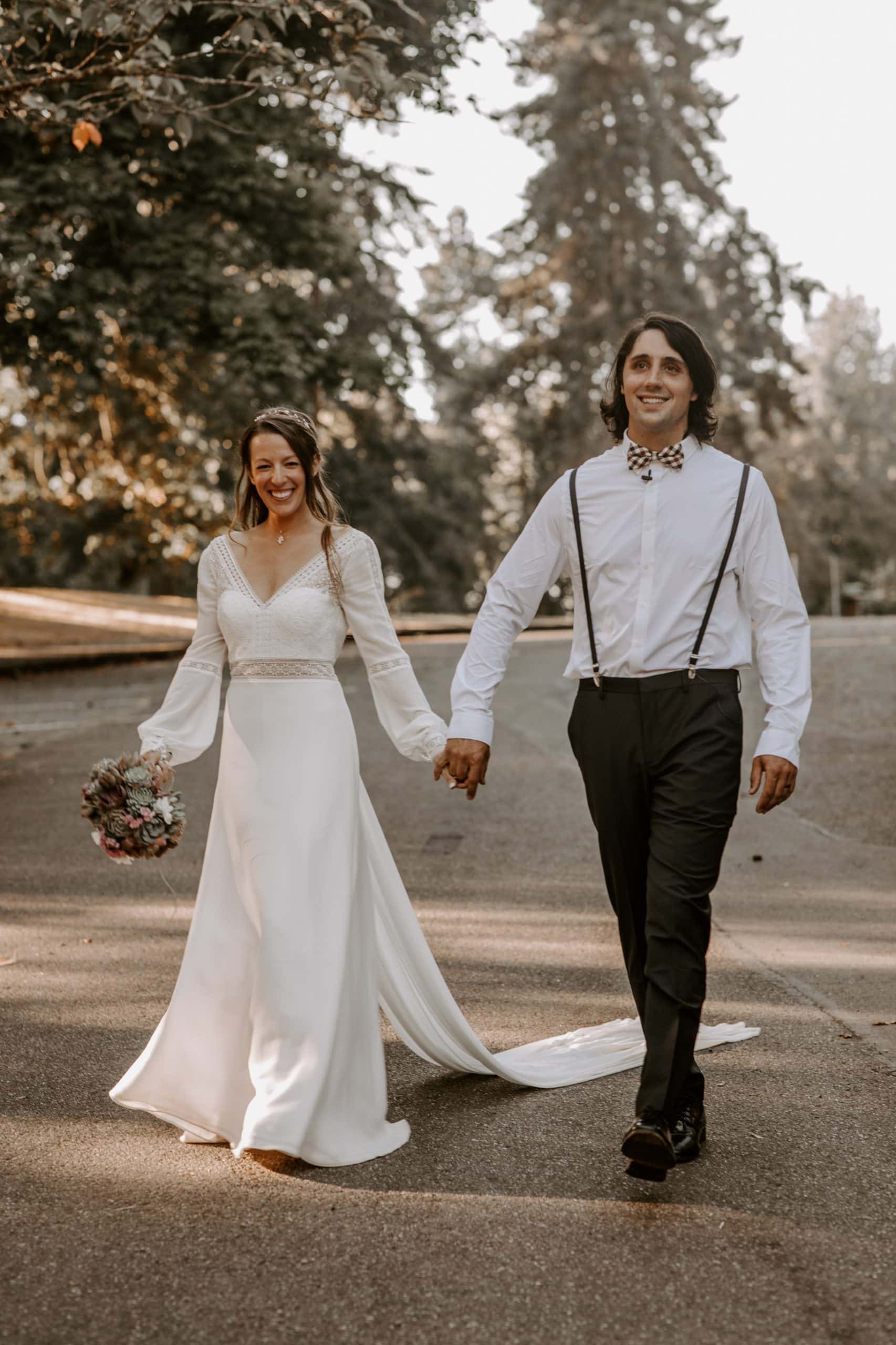 Looking ahead, we should mention that all this craziness with COVID-19 not only ruined their plans for the wedding but also made them hit upon a brilliant idea of celebrating two weddings. One small wedding party was appointed on August 15, 2020 in Seattle, WA, second one will be held on August, 15 2021 in Vermont. Why is it so? Undoubtedly, they also have a special story about that.

The biggest passion of our newlyweds (besides each other) is traveling. By the way, it’s not just mainstream tours when people are hanging out on the beach and doing nothing. These guys are real adventurers that prefer following their own routes instead of walking on popular trails. In order to feel as comfortable as possible during these trips, they have come up with idea of building a van out of school bus. It has become a second home for them. Evan was born in Vermont, Andreana – in Seattle. That’s the reason why the most memorable and exciting journey was from the birthplace of Evan to the birthplace of Andreana. This van played an important role during the wedding as well. 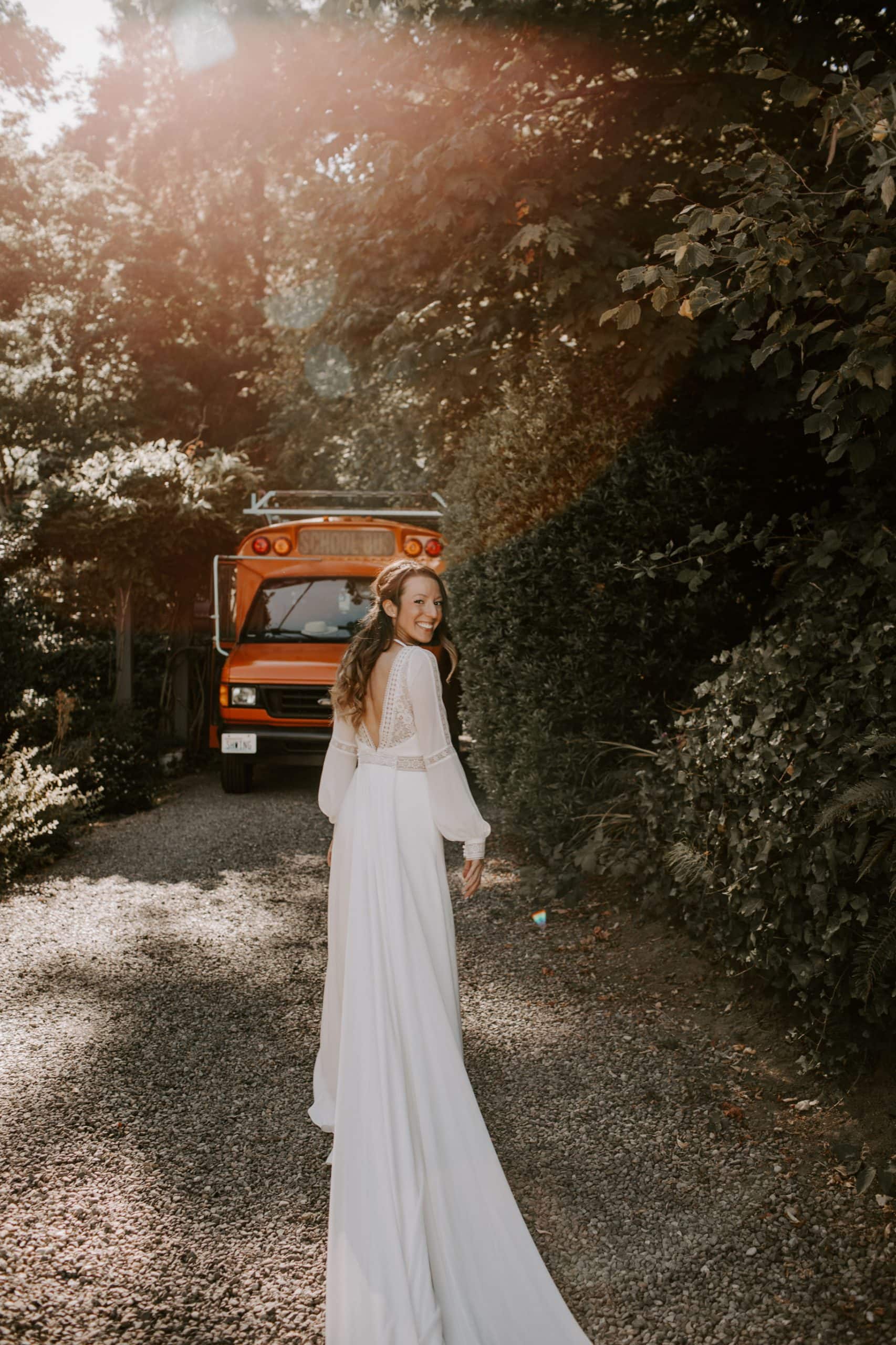 Well, let’s go back to the wedding day. It was agreed to perform a wedding ceremony in front of the closest relatives and friends in a city park. The atmosphere was tranquil and relaxed. Probably, it was too relaxed because the fiancé barely missed his own wedding!

So, this is how it was: we arrived early in the morning when the bride was getting ready for the wedding. Everything was nice and romantic until the moment we turned out in the wedding site that was in Seward Park. Andreana was wearing an elegant white dress, chic and solemn. Suddenly she glanced around the park and said: “OMG, is it Evan?”. Just up ahead, at the end of the road there was Evan. He was smiling broadly and felt relaxed while going. He was wearing shorts, white T-shirt and acid green bandana. Of course, Andreana expected to have a special wedding. But it was too much! She hoped that at that moment he would be standing at the edge of the forest in tuxedo and waiting for the love of his life. She couldn’t expect him walking with his friend like he went skateboarding instead of the wedding! 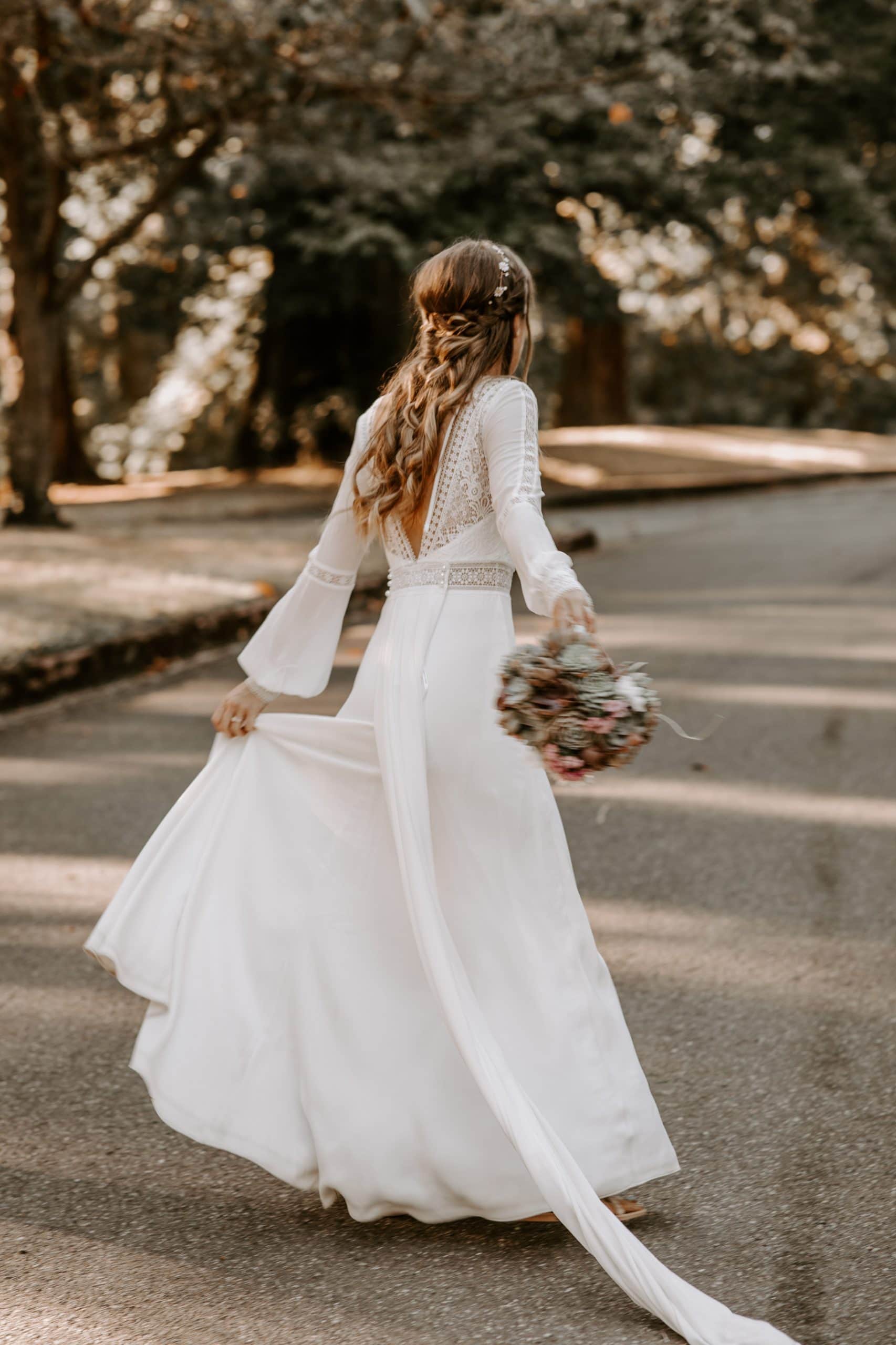 We looked at the face of Andreana, put two and two together and got that a dark cloud came out on her happiest day! You should know that if you hire us as videographers, it means that we are not only videographers but also your friends that are ready to help if necessary. We will never allow anything to put you in a bad mood in one of the most important days of your life.

Of course, we have managed it: while Nina was trying to calm down and cheer up Andreana, Lev ran to fiancé to hurry him up until the bride didn’t do it. It turned out, by the way, that Evan’s parents with his tuxedo were still on the way to the park. However, he didn’t worry about it at all. It crossed our minds that this guy just doesn’t care and there is almost nothing that can make him feel sentimental or worried, but we jumped to conclusions. 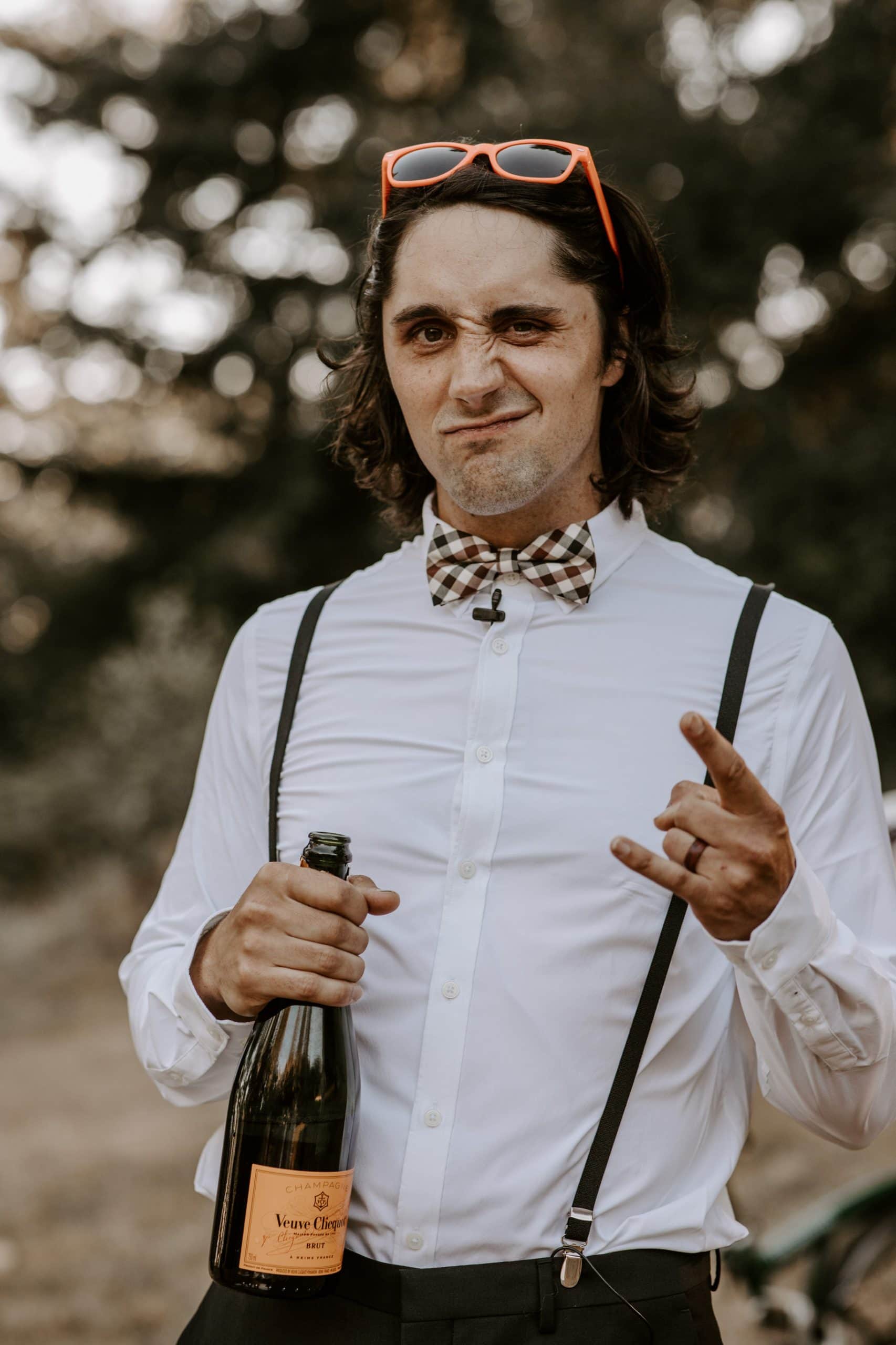 When the time to exchange vows has come, Evan was different: he was nervous, couldn’t hold back his tears and speak because of a lump in his throat. Even unusual and a bit ironic words for such vow didn’t lower the degree of romance.

THEY BUILT A BOAT FOR THE WEDDING DAY

Have we already said that this couple is a bit crazy? So, after the ceremony and picnic they both decided to take skateboards and tie tin cans behind. They went skateboarding with these jangling cans. Even father of the groom agreed to join! And it was not the end of adventures. They planned to have very unusual wedding and they did it! It turned out that not only travel bus but also a boat participated in the wedding. Guys made it on their own! 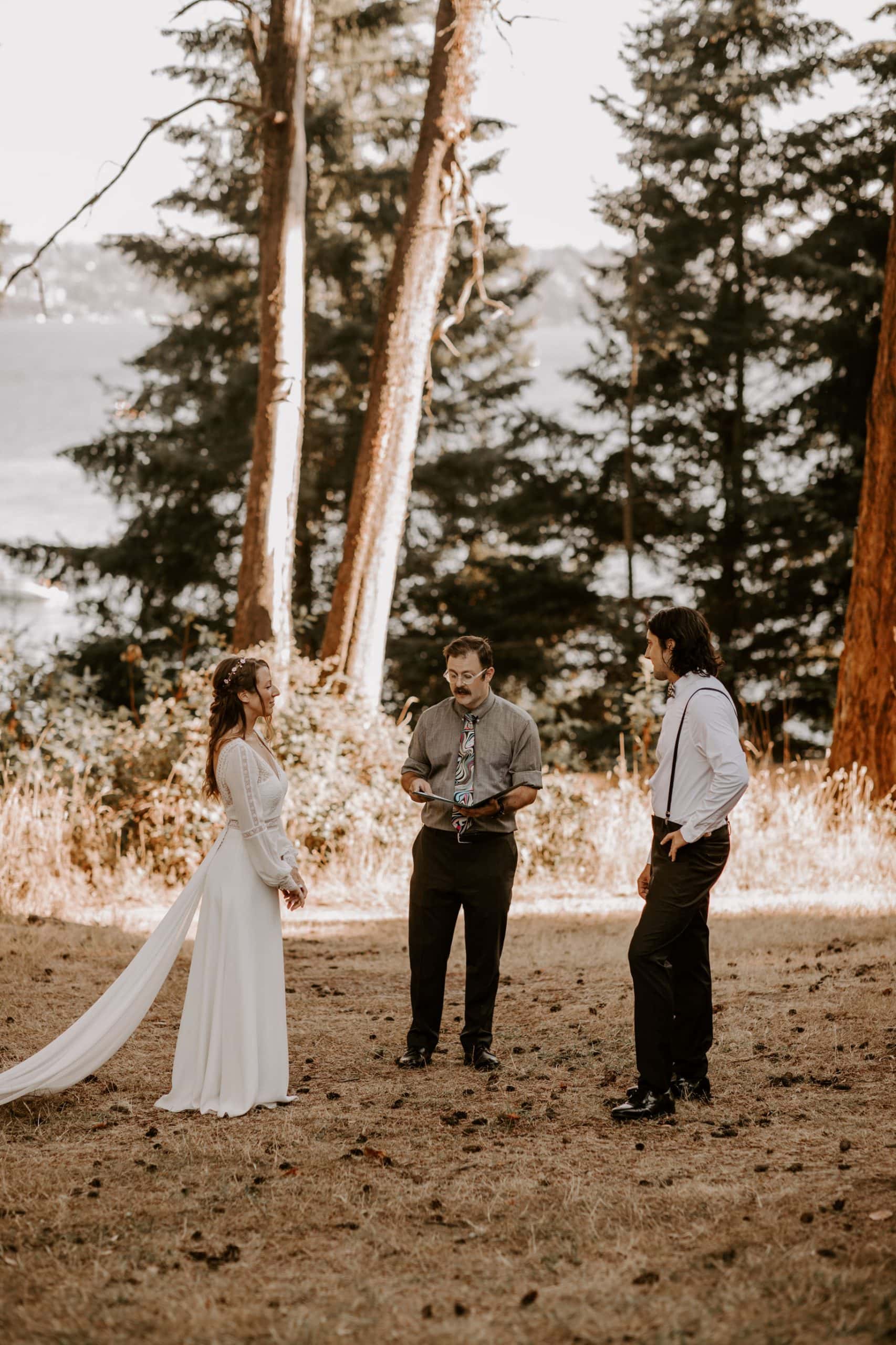 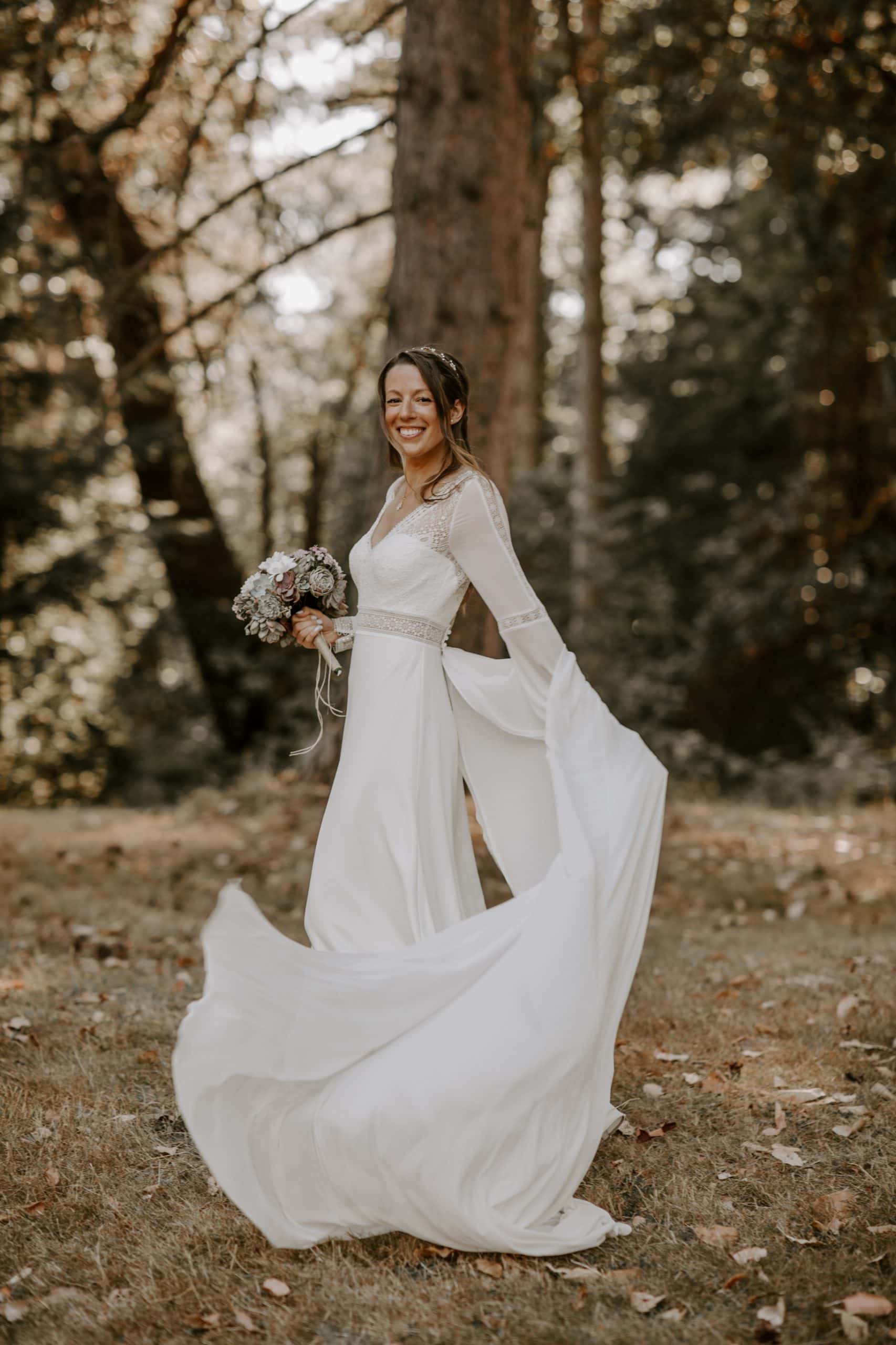 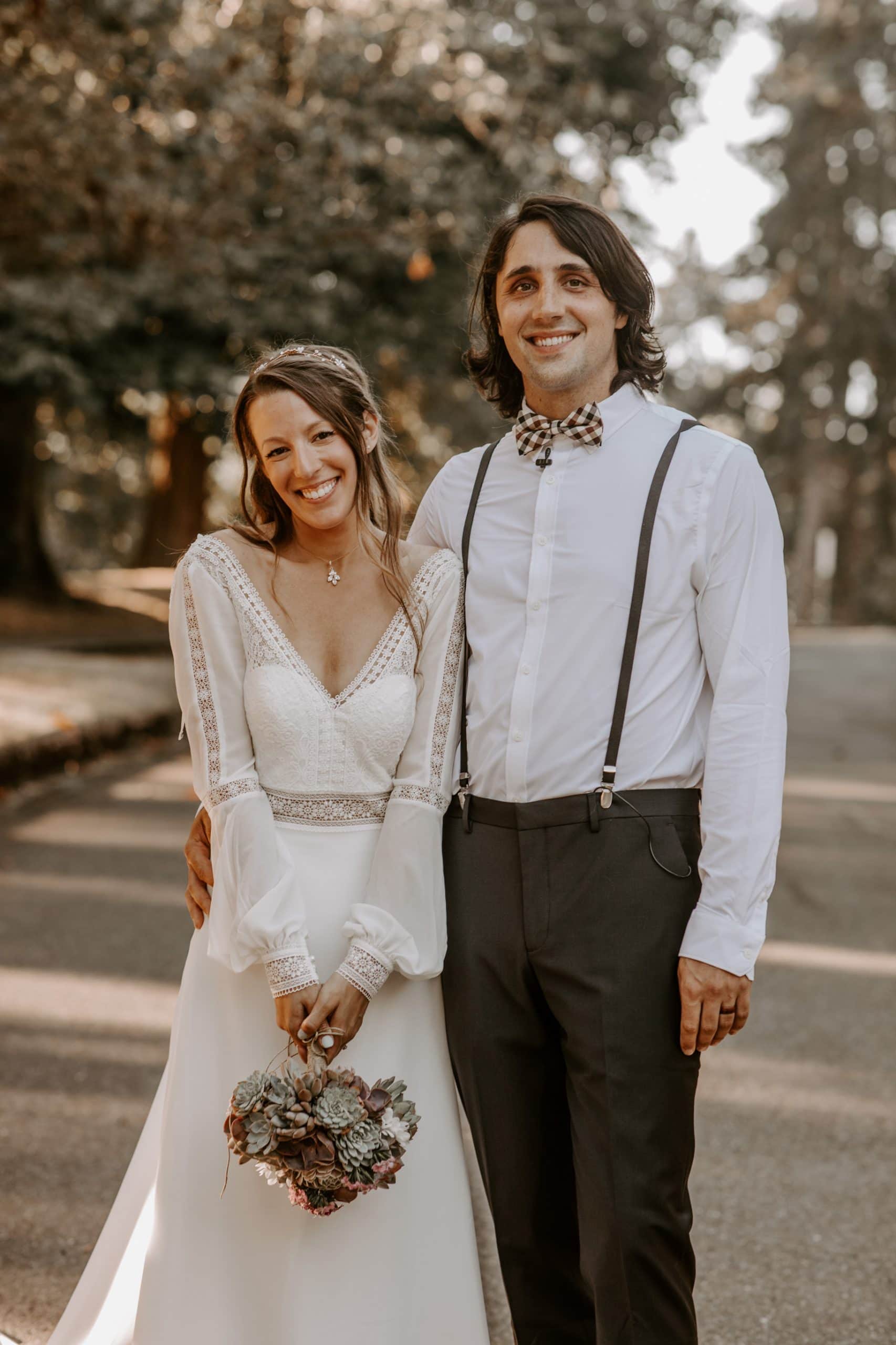 Towards the evening we had to hurry guys up because the sun was straightly going down and their boat was still in the parking lot. We had to set this boat in the water before dark.

POPPING CHAMPAGNE ON A BOAT AND DANCING ON A BUS

When we pulled this happy just married out of the company of relatives, we went to the parking lot. To be honest, looking at this couple in wonderful wedding outfits, cheerful after drinking champagne, dragging this boat to the water not only makes eye happy but also provides an opportunity to make spectacular shots. If we could speed up the video where they were pulling this boat and then dragging it on the grass, where the groom was running to grab forgotten engine, where the bride in her wedding dress and converse was setting this boat in the water and then insert the music from the Benny Hill show, it would be hilarious! So, don’t be scared to be creative! 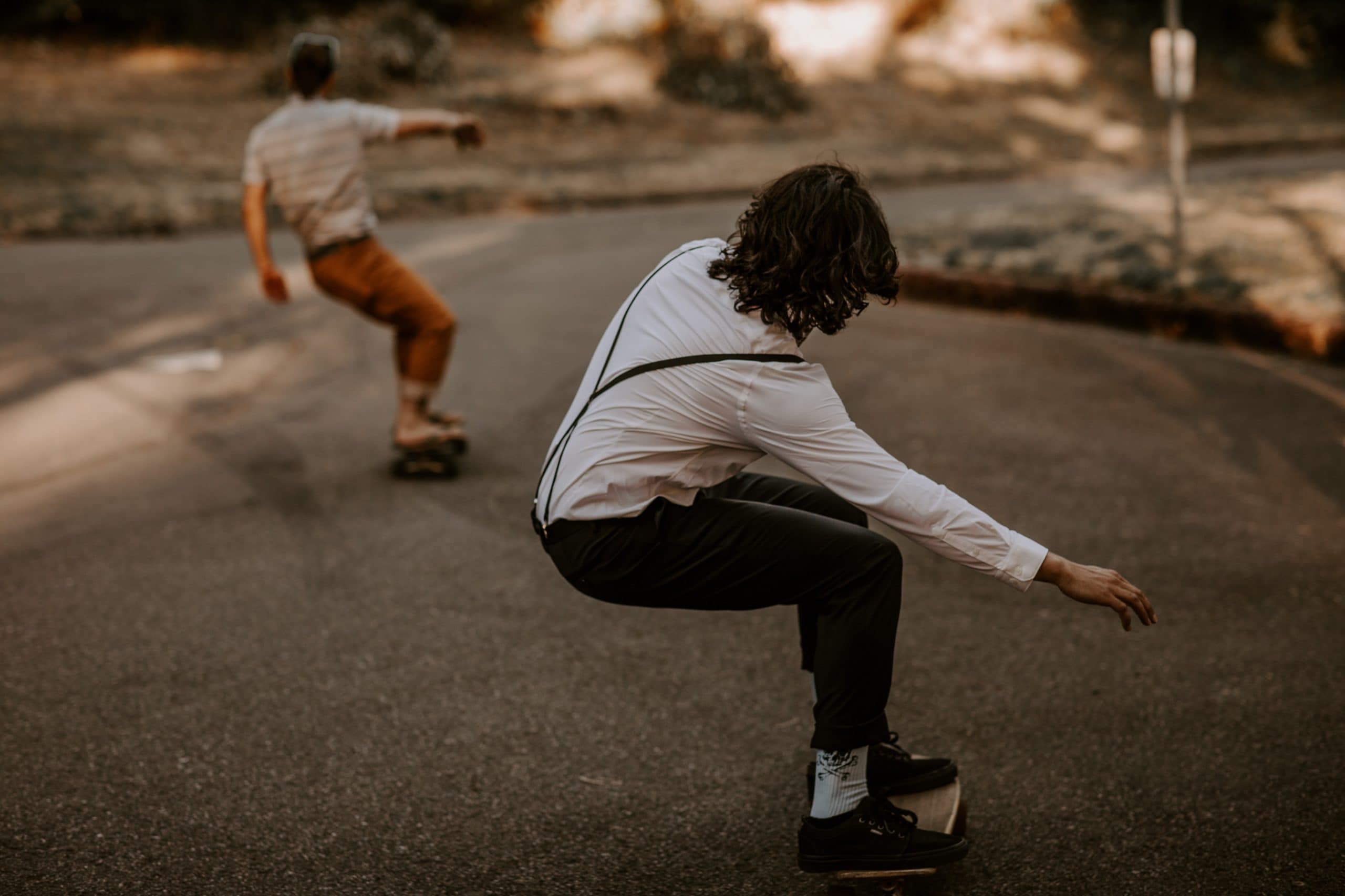 Finally, we caught the moment! The dream of drinking champagne on the boat floating on the lake at sunset has come true! We used a drone in order to make several awesome shots. It definitely was worth it and made the wedding film even more cinematic!

The end of this wedding couldn’t be usual, too! There was a dance on the roof of a travel bus in dirty wedding outfits in the night. This couple was drunk… But they were drunk not on champagne but with love. Definitely, it was a great final chord! 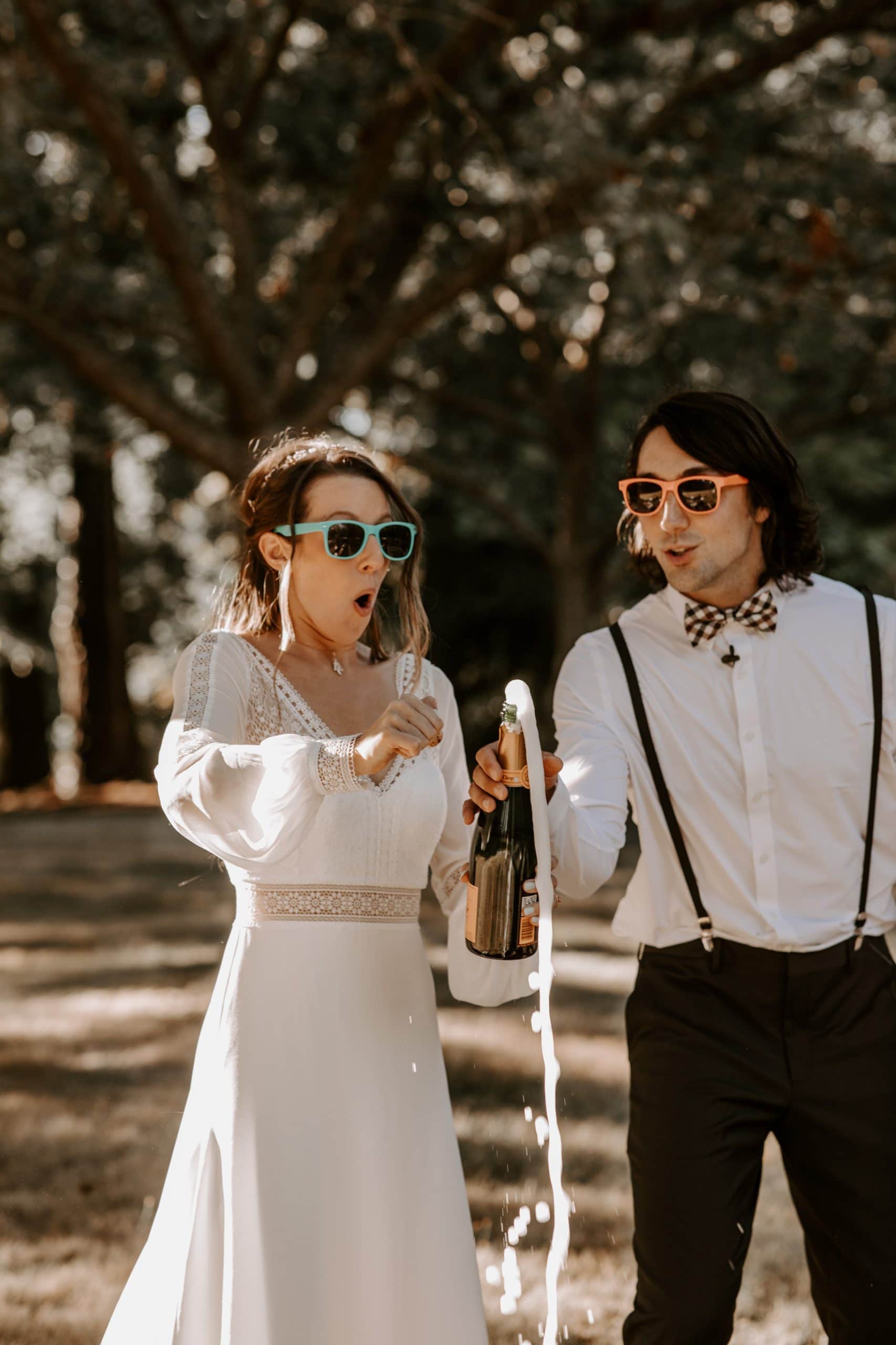 We are sure that this wonderful family will drive across many picturesque places. By the way, for the honeymoon they have already planned a road trip from Seattle to Baja, Mexico. So, if you see their orange bus in your city – say hi from Nina and Lev!